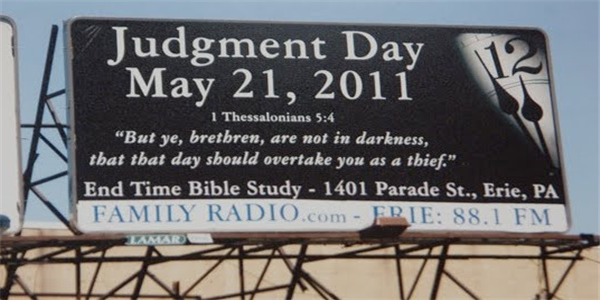 I can only imagine how the people that believe that feel right now. I am sure it is very real to them.

Internet Buzz: What does the bible Actually Say?

“However, no one knows the day or hour when these things will happen, not even the angels in heaven or the Son himself. Only the Father knows.  – Matthew 24:36

“For false messiahs and false prophets will rise up and perform signs and wonders so as to deceive, if possible, even God’s chosen ones.”  – Mark 13:22

I believe that eventually Jesus will come again but who am I to say when. I also think that on May 22nd a lot of people are going to loose their faith. That is a bad thing because faith is good. There is nothing bad about it, I would rather have hope then nothing.

Internet Buzz: OR Is It Like The Day’s Of Noah?

The bible recalls a story of a guy named Noah, God said to Noah since there are no good people left I am going to destroy the world.  Noah was telling people that the sky is fallen, but nobody listened to him. Instead they mocked him and partied like it was 1999.  If you remember we barely escaped certain doom from the Y2k Bug.

Anyways, I don’t want to be that person mocking the living god while his wraith is pouring on this little planet and its inhabitants. I believe in my heart that Jesus will return one day. Until that day though I have to go to work and feed my family. My animals need to be fed etc..  When the time comes it comes. I don’t think dwelling on it can do anyone any good.

Some people are mentally ill and they are scared right now because they believe the end of the world is coming very soon. Even if it is, these people are frozen unable to function in society because of their fear.

Nobody can predict the future,

One thought on “Internet Buzz: May 21st The End?”